GLENVILLE, GA - For Delbert Bland and his family, farming is a way of life. Not surprisingly, then, the Bland Farms family just announced its 70th year of farming. Over the years, Bland Farms has been instrumental in growing the Vidalia® brand, including being one of the first farms to incorporate Vidalia onions into processed foods. It also began a mail order business in the late 80s that introduced the Vidalia name to markets west of the Mississippi River.

According to a press release, Delbert and his wife, Sandra, have honored and grown the family business that was passed down to them from Delbert’s parents. Like his father did with him, Delbert is passing down the lessons of the family farm to his sons Troy and Landis. Sandra and additional family members are also involved in the day-to-day operations of running the farm. Bland Farms noted that it will always be a family affair.

In 1982, Delbert Bland and his late father, Raymond, began growing Vidalia sweet onions on just five acres at Bland Farms in Glennville, Georgia. Today, Bland Farms represents a large amount of the entire Vidalia crop annually. Recognizing and acting on the rising demand for sweet onions, Delbert expanded production outside of the Peach State, both domestically and internationally including Texas, California, Peru, Nevada, and Mexico. These strategic growing partnerships have proven themselves to be extremely valuable, allowing Bland Farms to supply sweet onions year-round.

Bland Farms saw an opportunity to expand its produce offerings and began growing sweet potatoes, specifically the Covington variety, in 2014. Delbert says he learns something new every year. 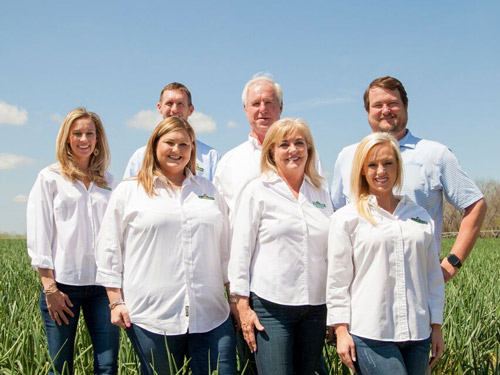 Through hard-work, perseverance, and faith, Bland Farms has developed into a produce industry leader. The family noted that due to this success, they have been able to give back to their community and industry. With the Raymond D. Bland Scholarship for Agriculture, Bland Farms rewards students who have demonstrated similar qualities to those of Bland Farms and are in pursuit of an agriculturally related field of study.

The family is also a supplier with America’s Second Harvest of Coastal Georgia, a locally-inspired, volunteer-driven, non-profit food bank. Bland Farms provides 4,000 lbs of onions weekly, which is then distributed through 300 agencies to families in need throughout southeastern Georgia. During the month of October, Bland Farms packages sweet onions in pink packaging to bring awareness to Breast Cancer. In addition to the pink packaging, Bland Farms makes a yearly monetary donation to the Breast Cancer Research Foundation.

Congratulations to Bland Farms from the ANUK team on 70 years of farming!