WATSONVILLE, CA – As the presidential election ramps up across the nation, California Giant Berry Farms is continuing a neck-and-neck election of its own with the company’s Red State-Blue State promotional sweepstakes.

“We knew this would be a fun promotion during this time period, but had no idea how it would play nationally with consumers,” stated Cindy Jewell, VP of Marketing.

The lighthearted take on the national election focus has received over 100,000 entries in its promotions, with thousands subscribing to the mailing list to support the brand.

According to a press release, it appears as though the color coded campaign is seeing a big push for red strawberries as the campaign enters its last month. Consumers can still vote red for strawberries or blue for blueberries by using the hashtag #berriesforpresident. 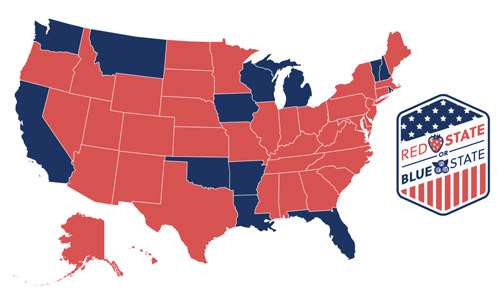 California Giant stated that it held a Twitter party last week to provide some comic relief to the Presidential debate, and garnered almost 6,000 tweets in one hour. The Twitter party generated over 7 million impressions, and trended third on a national scale within minutes.

Each of the company’s fruity candidates will be pulling out the stops as the last month proceeds, earning votes as recipes are featured, versatility promoted, and seasonal availability are shared with their loyal followers and undecided voters.

California Giant will continue to introduce engaging promotions to consumers in order to build a stronger network of influencers and shopper contacts. The company also stated that it is continually improving ongoing relevant communication with consumers who have purchased its brand, while also retaining a fun factor.