Kalettes® Shares Stage With Celebrities at the American Music Awards

SANTA MARIA, CA - Musicians and celebrities were not all that was abuzz at the the American Music Awards®, hosted on Saturday, November 21 at the W Hotel in Hollywood. Tozer Seeds was invited to participate in the luxury gifting suite, where they were able to introduce Kalettes to approximately 100 celebrities.

“We are so honored to have been invited to be a part of the American Music Awards luxury gifting suite, and used this opportunity to increase awareness for Kalettes among the celebrities, who we know are powerful influencers,” Kraig Kuykendall, Sales Manager of Tozer Seeds America—the company behind Kalettes—said in a press release. “Since the event, we’ve already received several requests for Kalettes samples from some of the celebrities and are excited for Kalettes to be a part of American pop culture.” 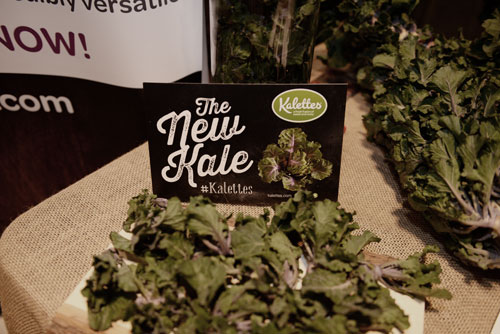 Among the influential faces to appear at this annual star-studded event and give the Kalettes a try were:

Kalettes, the superfood hybrid that are the product of more than a decade of research by Tozer Seeds, are not genetically modified, but a product of cross-pollinating brussels sprouts with kale through traditional methods.

Tozer Seeds, which has exclusive marketing agreements with select companies to both grow and market Kalettes, expressed great excitement for the opportunity to network with so many influencers on an individual basis to increase public awareness about this nutty but sweet, nutrient-dense veggie.