ST. LOUIS, MO - News hit the streets that Bayer and BASF SE could be looking to buy Mosanto, effectively boosting its shares this morning.

Up as much as $100.33 per share as of 9:30 a.m. EDT, a boost of about 12 percent, Reuters reported that interest in the seed producer, worth upwards of $44 billion, showcased a drive for further consolidation in the seed sector.

News of those interested in the Monsanto acquisition was released this morning, with Bloomberg reporting that people close to the deal stated that Bayer has discussed how to finance the acquisition including potential asset sales. Bayer is valued at about $96 billion.

Likewise, The Street Insider reported almost simultaneously that BASF SE was also exploring a buyout of the company.

While the information was just made available recently, and all three parties have declined to comment on it, Reuters reports that parties who wished to remain anonymous noted that both Bayer and BASF have been exploring a combination with Monsanto for several months, but valuation concerns have made a deal elusive. 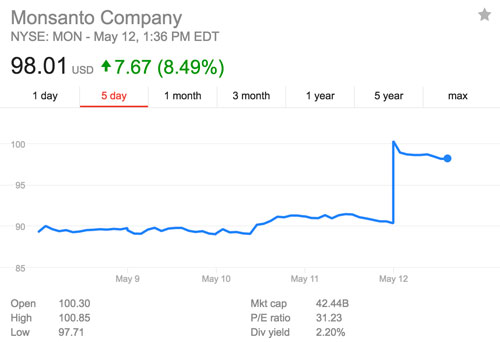 While it is still too early to tell if any of these talks will come into fruition, it would be Monsanto’s next step in trying to be a more consolidated seed resource for the ag industry.

As we reported previously, Monsanto fought strongly to acquire European-based Syngenta before the company eventually went with a $43 billion deal with Chem China.

AndNowUKnow will continue to follow this story as it develops further.