ORLANDO, FL - After two successful years, Produce for Kids is launching its third annual Power Your Lunchbox Pledge® campaign. The program encourages families across the nation to pledge to eat a healthier lunch from August 8 through September 23. The pledges can be made at PowerYourLunchbox.com, just in time for the start of the new school year.

“Back to school is a great time for families to make a healthy resolution they can carry on through the duration of the school year,” said Trish James, Vice President of Produce for Kids, according to a press release. “As a mom of two boys, I understand the challenges parents face when packing a healthy, nutritious lunch for their children and for themselves. The Power Your Lunchbox Pledge was designed to help families tackle this universal challenge.”

During the campaign, Produce for Kids will be generating a healthy lunch buzz by giving away a Bentology™ bento box each day and hosting a #PowerYourLunchbox Twitter party. Additionally, for every online pledge, lunchbox-friendly companies supporting Power Your Lunchbox Pledge will make a collective $1 donation to Feeding America® programs that support families and children. Partners supporting Power Your Lunchbox Pledge 2016 include:

Here are a few ways to get involved in the campaign:

Teachers and dietitians supporting the initiative can find their own dedicated resources on the website. Teachers can find fun, free nutrition-focused downloadable lesson plans, certificates for their students, take home materials for families, and classroom pledging materials. For dietitians “We Heart RDs” kits will be sent out with items such as pledge sheets, “I Pledged” stickers, lunchbox recipes, and more. 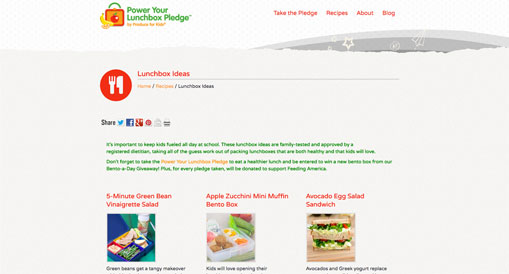 “Retail dietitians are in a position where they can support families during the back-to-school timeframe while they are in the store making decisions,” said James, according to the release. “It made sense to bring the Power Your Lunchbox message to our more than 300 retail dietitians so that they can share healthy back-to-school recipes with shoppers.”

As we previously reported, the campaign has raised more than $15,000 for kid’s health and wellness programs across the country since 2014.