FRESNO, CA - It has been a sweet harvest this year for Crown Jewels’ grape program out of Sonora Mexico where the company is currently harvesting across four different districts. With an abundance of grapes coming from Guaymas, Pesqueria, La Costa and Caborca, the company’s program should bring retail partners consistent grape supply through the end of June, weather permitting.

Crown Jewels’ newest development this season, is the addition of grapes out of Guaymas, which are displaying plenty of promise for future growth especially with the newer varieties, Partner Atomic Torosian, tells me. The industry veteran took a few minutes to share the latest updates with me on the season, and what we can anticipate as we move toward California’s grape deal.

“We are currently harvesting Flames, Sugraones, Black Seedless and Red Globes. We have finished harvesting Perlettes for the season and have some new varieties that are in the ground for next year,” Atomic, tells me. “The way this current 2016 season is moving along, we will be winding down our production by June 22-23rd and hopefully finish shipping by July 4th out of Mexico. Our Arvin deal should start up around June 23-24th, so we should not have too big of an overlap.”

As for the status of the current crop, Atomic notes that the quality has been very good on most varieties, but the production has been down from last season on Perletttes, Sugraones, and Black Seedless. The Flame crop seems to be close to normal in most areas.

With California quickly approaching Atomic tells me that he believes that the entire production from California will be up this year and for the next several years, “So we could be seeing an increase for a couple of reasons. The biggest reason is the new varieties produce more volume per acre, and there has been a removal of some large crimson blocks that will make way for a gradual increases each season.” 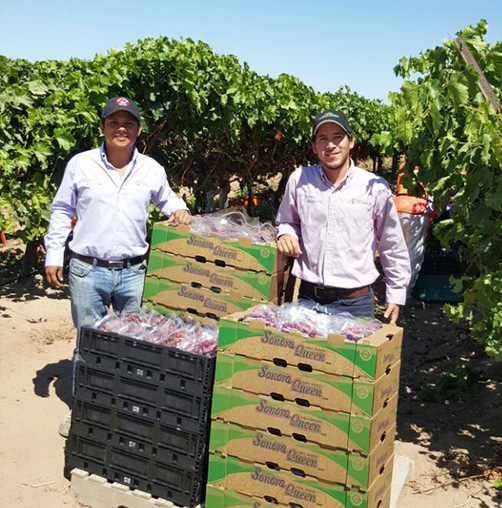 As we look ahead to the summer months, Crown Jewels will also be kicking off its California melon deal beginning with its growing region on the West side of Fresno, California, around the 4-5 of July.

“The season should get under way off the ‘Golden Westside’ around July 4th give or take a day or two,” Atomic says. “Our season for Cantaloupes and Honeydews will run from July 4th to about October 12-14th. We will be packing all of our fruit in the Crown Jewels label and packing primarily 'Western' type varieties of cantaloupes with heavy-netting and a full slip, as well as good sugar and taste with that famous cantaloupe fragrance that you can sense from across the produce aisle,” Atomic notes. “These are the varieties of cantaloupes our retail customers are looking for on a consistent basis.”

Some of the newer varieties taste like another melon variety all together, he shares, and have very little of that ripe “Athena type” cantaloupe essence.

Crown Jewels’ new 2106 summer melon program from California fits in well with the company’s year-round melon programs from Mexico in the spring and fall. These melons will be packed under the Crown Jewels label.