FRESNO, CA - While Crown Jewels Produce Company may be known for its Mexican vegetable program, company President Rob Mathias and Partner Atomic Torosian are excited to announce the start of their 2016 California Summer Melon Program.

Already having been deeply rooted in cantaloupe and honeydew sales their entire produce careers, both Rob and Atomic say they're ready to start working out of "The Westside" of California working with S&S Ranch.

"Crown Jewels was absent from a large Cantaloupe deal during the 2015 season but is now back with a major deal to kick off the summer melon season in early July," Atomic tells me. "We are looking forward on marketing under the ‘Crown Jewels’ label and expect approximately 2 million boxes of cantaloupes and a half a million boxes of Honeydews this summer." 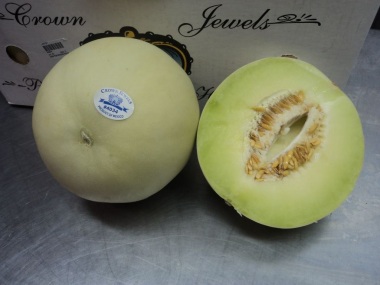 Spearheaded by Martin Ramos, Senior Manager of Quality Assurance, who will be overseeing all daily operations, Crown Jewels expects the new melon deal to keep the company balanced with its grapes, pears, apples, and pomegranate grower programs.

"With the addition of this new melon deal, it helps fill the gaps for the entire year with melons from Mexico in the spring and fall and melons from California throughout the summer months," Atomic adds.

After celebrating Crown Jewels’ 25th Anniversary this past season, the company is continuing to push the boundaries as a diversified grower, packer, and shipper. Expect the company to continue to evolve its year-round supplies of important produce items, and expect AndNowUKnow to report on it every step of the way.