ELGIN, MN- Honeybear Brands is an apple grower that rarely sits still. As one might gather from the previous reporting we’ve done, from intensive varietal development programs to the launch of a massive retail campaign, the brand is determined to keep innovation at the forefront of its business.

After the debut of its largest-ever retail campaign, I checked in with Don Roper, Vice President of Sales and Marketing for Honeybear Brands, to see how the Pazazz demo promotion, spanning 50 markets and 200 stores, is unfolding.

“Our Pazazz demo team has literally been crisscrossing the country and parts of Canada this past month,” Don tells me. “From Minnesota, to Miami and Toronto, to Texas, we’ve had team members traveling thousands of miles and meeting with thousands of consumers. Pazazz, in its third year of commercial production is now at good volume and sales have been fast and furious across our eleven retail partners. That tells us several things: we have very strong retail partners in place, that they understand what their customers want, and that Pazazz is delivering something that’s very difficult for customers to find at this time of year: that just-picked fresh flavor, crunch, and apple eating experience.”

The driving force of this campaign? Flavor. 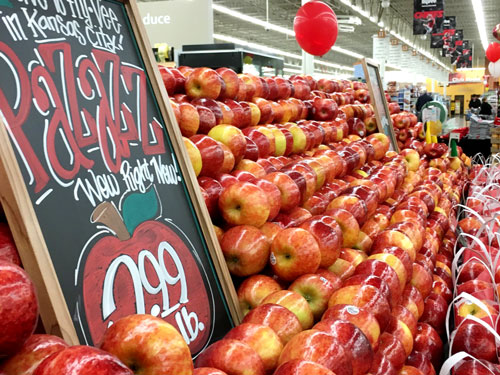 After conducting numerous focus groups across North America, the company's research consistently comes back demonstrating consumers’ focus on flavor. According to Don, the research shows consumers are looking for an apple with great taste and a crisp snap texture. Customers want that “Wow Right Now” flavor experience with a great crunch factor, and Pazazz delivers. Which is why, in this campaign, the company is looking to partner with retailers who view new varieties as a strong tool to help differentiate them from the competition.

And differentiate they will. The demo campaign is striking, with a wide variety of dramatic, high-graphic displays, you might say it is impossible to ignore these apples with towering decks of Pazazz, custom POS visuals, in-store sampling, tasting teams, and more.

The proprietary variety brings a focus on the intense sweet and tart flavor, with a juicy crunch that goes all year long, making the Pazazz a great winter apple. This is thanks to the variety's unique storage capability, which is due to the balance of starch in sugars which allow the apple to store well, translating to a crisp, fresh apple to the end consumer this time of year. 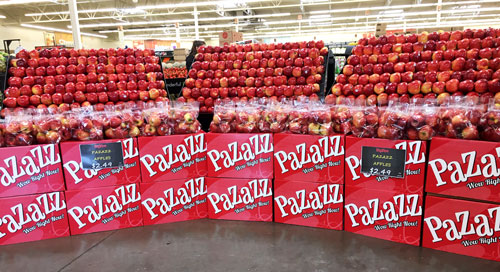 Retailers participating in the demo campaign include:

“Our retail partners play a critical role in the success of the new varieties–they are the conduit to the consumer and their efforts directly correlate to the overall success of the variety,” Don tells me. “We recognize this so we help to put all of the tools possible in their hands to drive new product introduction with their customers. Our teams execute demos on a large scale, provide exciting attractive POS, support ad opportunities, and then layer targeted social media campaigns over the top of the store door efforts. Consumer adoption of Pazazz is over 80% so we know the key is to get our apple in mom’s–or dad’s–shopping cart.”

Already winning over shoppers and retailers with its “Honeycrisp-like crunch” and intense flavor, Honeybear anticipates the Pazazz to roll out nation-wide distribution in 2018. The variety is being tested in the Southern Hemisphere in order to increase production windows and scale up to meet incredible demand. With such an ambitious program lined up for the first quarter, it looks to be a promising year for this consumer-focused brand.

Stay tuned with AndNowUKnow as we continue to cover the latest and greatest in innovative promotions throughout fresh produce.