OCEAN BEACH, CA - We have seen McDonald’s dabbling in more produce offerings, and even a vegan burger or two, but what if this is just the beginning of an overall shift in fast food?

While we might be getting ahead of ourselves now, a burgeoning Southern California chain is dreaming of such a future.

With Zach Vouga and Mitch Wallis, Harris started the fast food concept that offers foods with no animal ingredients, as well as being free from cholesterol, GMO, artificial colorings, flavorings, and preservatives.

“The fast-food industry has successfully answered a need by providing a convenient way to get our meals on the go while at the same time delivering a consistent taste experience. The downside is that, by and large, this type of food isn’t very good for you,” Harris told Fox. “Our goal has been to inspire people to begin to ask themselves some important questions about where our food comes from and perhaps to begin to think differently about their choices. But we’re not doing it in a way that’s preachy or confrontational.” 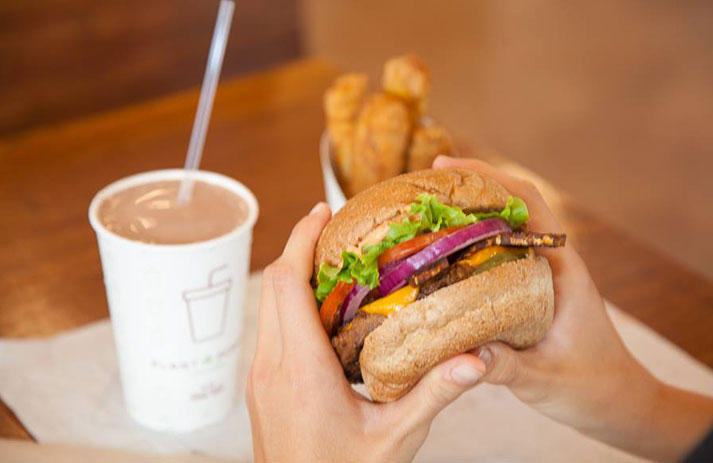 Though still a budding brand with two locations in Southern California, Plant Power is proving on paper to be offering something consumers want.

“Although we were only open for 11 months and six days in 2016, our San Diego location far exceeded our 12-month sales projections. That location is expected to finish the second year of operations with growth of over 63% from the first year,” Harris shared.

Before you think it’s a niche crowd spurring the trend, Harris added that it is “omnivores who want to try something new” making up the vast majority of the brand’s customers.

Details of just how wanted plant-based foods served via drive thru are include:

For now, the company is taking care not to bite off more than it could chew. Despite requests to franchise and move to a nationwide availability, the founding team has hopes of two or three new restaurants developing in the next six to eight months, with several more locations opening over the next year or two.

“At the present time, our brand is apparently a bit bigger than our business and we regularly get requests to franchise our restaurants from all over the U.S. and the world. The extraordinary interest is reflective of a big change in our society; one that we hope to be part of,” says Harris.

So, next stop is a broader base of California, potentially the greater U.S., and then the world.

To read more about a number of chains contributing to the “rise of fast-casual vegan eateries” and how it could be the future, read Forbes’ full article here.

As for AndNowUKnow, we certainly can’t wait to see how far the seed of plant-based fast food spreads, and how it might propel the produce industry.