This is not the first time in recent weeks that Albertsons has popped up as shopping for a new banner to acquire, especially in the organic sector. We recently reported that the company had initiated talks with Sprouts Farmers Market, though no further traction has been made known.

Now, two people close to the matter have disclosed that the expanding retailer is exploring a takeover of Whole Foods, according to the Financial Times, which reports that Cerberus had preliminary talks with bankers about making a bid on the banner.

A formal bid has not yet been made.

Whole Foods and Cerberus declined to comment on the matter at the time of publication, but the news did send Whole Foods’ stock into the highest spike it’s seen since Jana Partners LLC bought a sizable stake in the company. On Monday, numbers climbed as high as 4.5 percent, according to Bloomberg, or $37.33, in New York. 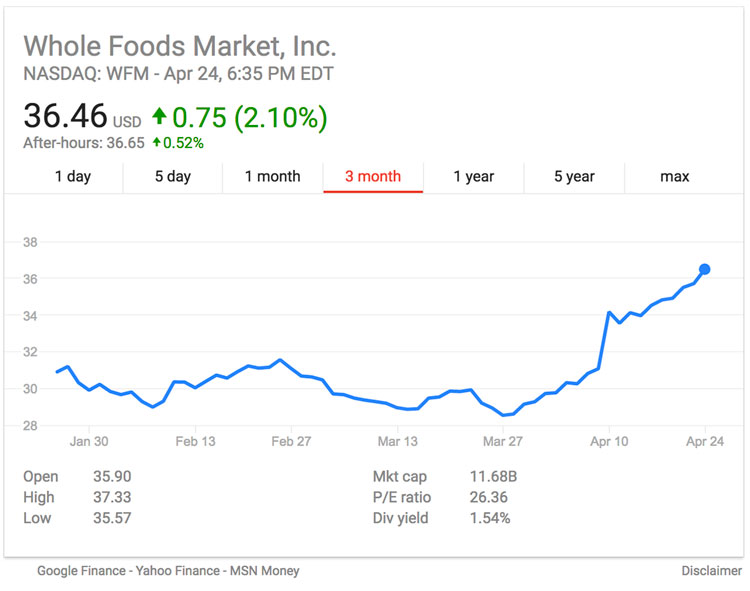 Other hats that have been tossed in the ring for possible interest in acquiring Whole Foods include Amazon, who reportedly looked into the possibility last year, and Kroger. More recently, the chain hired veteran attorney Heather Stern as its General Counsel and Global Vice President of Legal Affairs, who is known for her experience in retail mergers and acquisitions.

Might we soon see a for sale sign for the retailer? AndNowUKnow will remain on the lookout for this and other news in the buy-side and beyond for the fresh produce industry.