NEW YORK, NY - On Monday, a 13-F regulatory filing showed that the same activist investor who pushed Whole Foods towards its sale to Amazon, Jana Partners, had a 2 percent stake valued at about $5.6 million in Blue Apron meal kit company at the end of June. According to CNBC, since the information has become public, Blue Apron shares have gained as much as 5 percent.

Blue Apron initially set its sights high for its IPO in June, offering a target of $586.5 million. What followed was a disappointing start out the gates at $4 less than anticipated per share in the wake of the Amazon-Whole Foods deal which rattled investors in the online grocery realm, with shares continuing to tumble amid mounting losses as recently as last week. 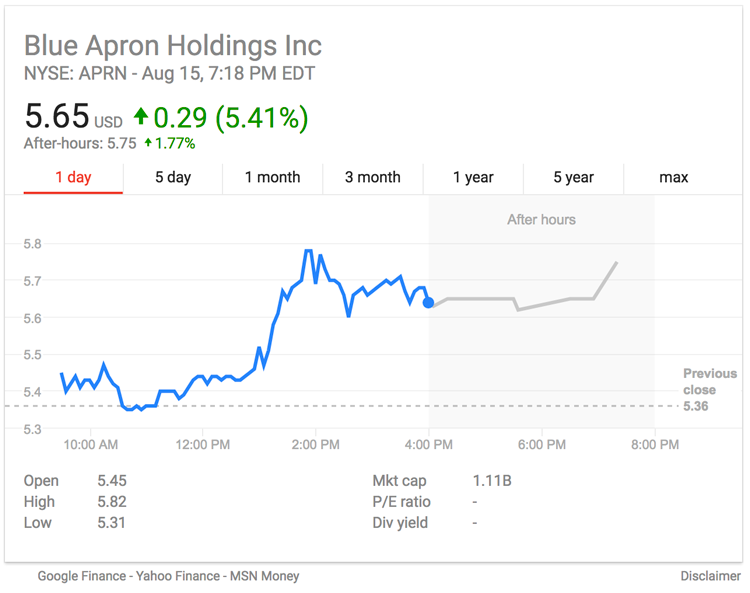 According to CNBC, it is unclear whether Jana still holds 600,000 shares of Blue Apron, and the firm has not responded to requests for comment. However, the report estimates that if Jana did hold all of the shares it purchased in the second quarter they would be worth about $3.2 million, at a 43 percent decline from the end of June.

Jana bought a stake in Whole Foods in April, which ignited high-profile conflict with Whole Foods CEO John Mackey. The grocers subsequent sale to Amazon was announced in June, and Jana soon sold its stake. The timing of the Amazon-Whole Foods announcement coincided with Blue Apron's IPO, and within weeks Amazon filed for a new meal kit trademark.

Blue Apron has scrambled to regain its footing since the IPO, even facing a potential lawsuit. In attempts to refocus its growth strategy, the company has since announced changes to its executive leadership and plans to close a New Jersey facility.

What will this mean for the future of meal kits and grocery? Stay tuned to AndNowUKnow as we continue to report.