BELLINGHAM, WA - The continuing saga between Albertsons and Haggen is turning a corner.

The two retailers are now “cooperating” to find employment for former Albertsons workers. According to a memo obtained by the Seattle Times, Haggen is seeking approval to waive the one-year ban that prevented Albertsons from hiring workers that were employed at the 146 stores it sold to Haggen.

As a pre-requisite for the approval of Albertsons’ $9.4 billion Safeway takeover, federal antitrust regulators required the ban, as well as the sale of the stores. 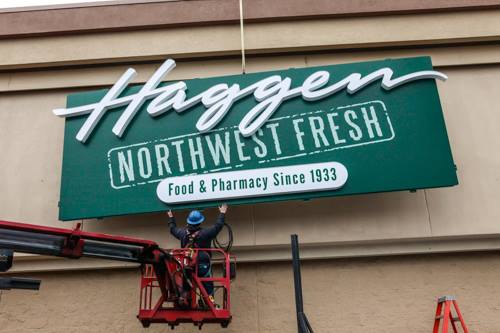 “We recognize that these are challenging days,” Haggen said in its memo to employees. “We want you to know with certainty that Haggen is supportive of employees securing work elsewhere.”

According to the Seattle Times, approximately 11,000 people are currently employed at Haggen. It had more than quintupled its workforce after buying more than a hundred Safeway and Albertsons locations, increasing its footprint from 18 to 164 stores total.

Now, Haggen and Albertsons have been involved in a legal back-and-forth that includes Albertsons’ lawsuit for unpaid inventory and Haggen’s lawsuit for alleged damages.

Only laid-off employees are currently eligible for hire at Albertsons. The United Food and Commercial Workers union successfully pressured Albertsons into giving former employees preference for open jobs and benefits based on their prior seniority with the company, the Seattle Times reports.

In the memo, Haggen said that getting a waiver from the FTC has been a “priority,” to “ensure our employees can take advantage of every opportunity available to them.”

The FTC is trying to approve the waiver on an “expedited basis.”

“We understand your frustration, but this is a process and we are only days into it,” Haggen said.

As we previously reported, Haggen intends to reorganize around 18 core stores that were found to be profitable. The company is currently in talks with potential buyers for a “significant number of locations,” and expects to share further news “perhaps as soon as next week,” it said in the memo.