KINGSVILLE, ON – Mastronardi Produce’s SUNSET® has been chosen as the new official sponsor of the Leamington Tomato Festival.

The festival, which started as the Heinz company picnic, has evolved over the past 31 years into the iconic community festival it is today.  The new partnership begins August 15th with the inaugural Leamington SUNSET® Tomato Fest. 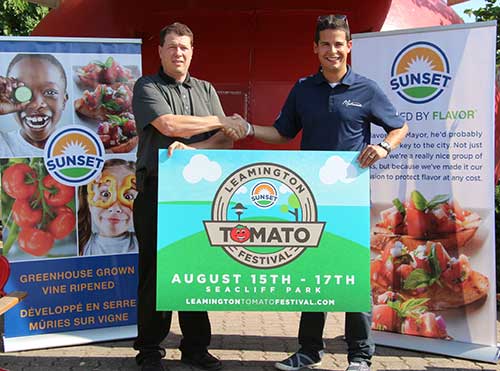 “The Mastronardi family has called Leamington home for 5 generations,” commented Mike Ciacelli, Director of the Leamington Tomato Fest.  “They’re now leading the tomato industry in North America and we couldn’t be more proud to have them as our sponsor.  With the recent closure of Heinz, this is definitely positive news.”

SUNSET® CEO Paul Mastronardi, a Leamington native, knows how the Heinz closure is affecting the community.  “My grandfather worked for Heinz for a number of years and many of our employees have close ties to the company.  Leamington is a small but strong community and we want to show our support in any way we can.”

Every summer, Leamington residents and members of the surrounding communities get together to celebrate the local tomato harvest with live entertainment, a tomato stomp and many family friendly activities, according to a press release.

Mastronardi Produce/SUNSET® has been celebrating its small town roots this year in honor of its 60th anniversary as a greenhouse company.  The company has grown from one small greenhouse to one of the leading greenhouse companies supplying fresh produce around the globe.

“My great grandfather emigrated from Italy back in the 1920s looking for a better life,” continued Mastronardi.  “Leamington has been my family’s home since then and has provided us with a world of opportunity.  It’s a great place to live and this is just a small way we can continue giving back to our community and our family.”