THE WORLD - It’s officially fall when the pumpkin voyages set sail. No, I don’t mean those necessary trips to the grocery store to grab the carve-able produce and delicious pies—I am talking about contests that look to giant pumpkins as a means of transportation and sport. In Lohmar, Germany, a paddle contest invited participants to hollow out giant pumpkins to create a boat and paddle across the Kewelshofer Lake. This was the third annual event, which required contestants to paddle over 35 meters. 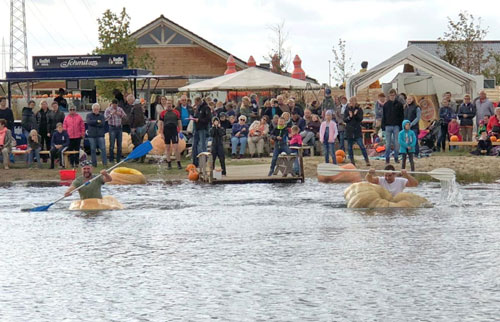 The pumpkins are grown for the race and must weigh at least 550 pounds to minimize the risk of capsizing, according to Reuters.

“It was hard fighting against the wind to get anywhere, but when you are in the groove, it works. I imagined it would be more difficult,” competitor Mailin Matuschek shared.

Some attendees and participants in the festivities were surprised by the contest works.

“I actually thought that after a few meters you would fall in,” Matuschek’s sister Jana-Mai said.

Those who raced the fastest in the six categories won $230 in prize money or $345 if they chose to paddle in their own pumpkins. 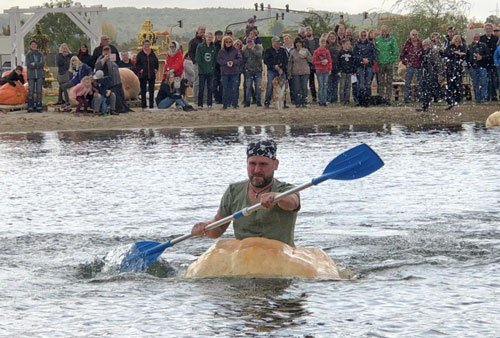 Germany isn’t the only country tapping into the fun to be had by boating in the seasonal produce. Contests like this are popping up all over the world. Elk Grove, California, recently held its annual pumpkin regatta competition, while, all the way across the states, another pumpkin-boating contest was held in Damariscotta, Maine. The tradition has deep roots in Nova Scotia, which held its 20th annual pumpkin regatta contest in Windsor.

These competitions have proven to be a great way to incorporate the produce essential into seasonal fun in unique ways.

Hmm, paddling a pumpkin in chilly water…it’s the simple things in life!