NASHVILLE, TN - On the heels of having just appeared at Southern Innovations, Under Secretary of the USDA’s Marketing and Regulatory Programs Greg Ibach announced yesterday that the department is investing $102.7 million to increase opportunities for farmers and growers across the country through five grant programs, according to a press release.

While in Nashville, Undersecretary Ibach shared with me not only moves to help support local food promotion and specialty crops, but also to counteract negative impacts on growers due to Chinese tariffs, local and international organic requirements, and an overall effort to ensure that “free trade is fair.”

Q: Speaking to organic integrity in the supply chain, are farmers reaffirming the USDA organic label? Are you seeing people call produce organic when it’s not, and how is that being addressed? 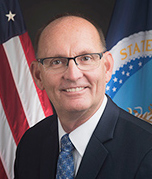 Greg Ibach: The organic industry has grown very rapidly. With that growth and the fact that we demand more products than we have producers growing here in the United States, there becomes this concern: Is everybody playing by the same rules?

I think the free versus fair trade concerns surface. So, something we are focusing on is making sure our domestic certifiers understand the rules and expectations and are applying that standard fairly across all producers. Whether they’re small or large, we expect them to meet that same standard. Then, internationally, we want to make sure the products coming in are meeting the USDA standards. That includes a lot of products that are coming in south of our border, Mexico and South America, where certifiers are applying the same standards, as well as in eastern markets in Europe that we want to make sure are meeting those standards.

So we’re working with those international certifiers, as well as partnering with APHIS (the Animal Plant Health Inspection Service) and customs and border protections to make sure they understand our rules, so they can helps us match up paperwork and make sure nothing slips through the cracks.

Q: There has been much focus on whether or not we will have a trilateral agreement and you mentioned we might need to diversify our portfolio as far as what countries we want to work with. Where might the U.S. be looking, or where should we be?

GI: We’ve focused a lot in almost every sector of agriculture on Korea, Japan, and China. They’re important markets, and we want to be able to continue to export to them. Korea came right to the table and updated their agreement right away, and we’re having great growth in that marketplace, especially in the meat sector. Japan has shown a willingness to want to sit down and talk to us even though we’re not moving forward with TPP.

China’s been a little bit more of a rocky road, and I think that’s probably one of the countries, as I talk to farmers and ranchers, that they’re most concerned about whether or not trade is fair. They appreciate access to that market and the opportunity that it provides for them not only now but in the future, but we need to be able to have trade be fair.

Beyond that, there’s a lot of places in Asia, especially in Southeast Asia, where the middle class is growing rapidly and presents some great opportunities for growth: Vietnam, Indonesia, and across that Southeast Asian region.

Q: Could you discuss the newly introduced purchase program and some processes that will take understanding and adjustment in terms of supplementing losses in this search of fair as well as free trade?

GI: The Food Purchase and Distribution Program, which is the one that is largely directed at trying to address some of the trade impacts on the specialty crop market has suffered, in many cases many of those categories have been the apples, the oranges, cherries...they’re very premium markets. So, if we are going to alleviate the price and trade pressure within those products that were actually going overseas, we need to reach out to buy those to create that relief and make sure we’re matching the specifications of what China was buying.

We know by not going into the export marketplace we’re forcing it into the domestic market, which will put price pressures on categories within those different commodities that had their domestic market and were fine that will be impacted adversely. So we’re working very hard to identify those specifications to make our orders match. That’s the product we want to distribute through the feeding programs.

We’re also working hard to try to make sure we’re going to programs that won’t displace purchases that were already being made. Families that come to these food banks are probably not going to the grocery store and buying what we are going to be supplying the food bank, so hopefully we’re going to be creating a new demand. That’s why the school lunch program isn’t our major target because we’re already buying product. We’re trying to work hard to make sure the good thing we’re doing is actually a good thing without an unintended consequence.

While tariff announcements continue between both the U.S. and China’s administrations, as well as continuous trade discussions with our North American neighbors and beyond, AndNowUKnow will continue to endeavor to bring the latest news to the fresh produce industry.