DELANO, CA - It is with a heavy heart that Dulcich & Sons has announced the passing of its Founder Jakov Prosper Dulcich at the age of 85. After immigrating to the United States in 1960, Jakov and his sons founded Dulcich & Sons, and have since expanded 80 acres to thousands of acres, embodying the American success story and elevating the table grape experience from vine to plate. 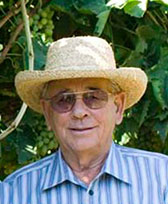 Jakov was born on April 10, 1933, to his parents Peter and Rosa Dulcich in Pergamino, Argentina. Growing up, Jakov learned to fish with his father and served in the military, but yearned for a different path. In 1940, Jakov’s parents moved back to Croatia to the island Hvar village Brujse. In 1959, he married his wife Antoinette and emigrated first to Chile, then to the United States in July of 1960. It was in the U.S. where he found his passion and dream after his Uncle Prosper Dulcich, who lived in California’s Central Valley, taught him how to farm and grow table grapes. He began working and saving to invest in his own land, building a future of planting and growing his own vineyards. While working to build his business, Jakov and Antoinette also worked to build their family, having three children, Rosie, Peter, and Nick. Jakov lost his beloved first wife in 1989. In 1994, Jakov remarried Tonka (Kennedy) Dulcich, who he lived with until his last day.

Through Jakov’s hard work, determination, skill, and talent, Dulcich & Sons set itself apart both through its character and by growing excellent grapes. He was an extremely talented and warm individual whose packing stations, fields, and work ethic were immaculate, and his legacy lives on in the table grape community.

All of our hearts at AndNowUKnow are with our friends at Dulcich & Sons, as well as with his family, friends, and everyone he touched over his many years in our industry.