SPARTA, MI - Today’s consumers have more and more choices at the grocer, including the produce department. With the volume increasing for the Evercrisp variety, Riveridge set out to create awareness around the “newer” variety with a mix of marketing, helping to drive consumers to a new favorite apple.

Evercrisp, an apple best known for its cross between Honeycrisp and Fuji, is a relatively new variety on the block with its first modest plantings in 2013. To educate consumers, Riveridge set out to target men and women aged 25-54, with a mix of event sampling, billboard, radio, and influencers. 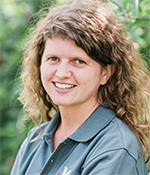 “Everyone is so busy. To get someone’s attention you have to be where they are; be a part of their day and we set out to achieve that with this mix,” said Trish Taylor, Marketing, Riveridge Produce Marketing.

Fresh off an event, Riveridge team members set up sampling at the Gate River Run in Jacksonville, Florida, billed as the nation’s largest 15K with more than 20,000 participants. There at the expo, where participants often bring the whole family, attendees could try a slice of Evercrisp and take an apple home. The event was the ideal demographic with health-conscious, active people who like to know where their food comes from. On race day, participants were treated to an apple after the race for their refueling needs with many returning to bring friends to show the apple they tried at the expo. 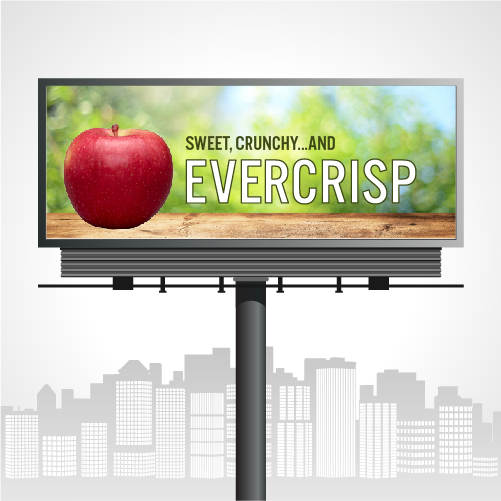 Pandora radio was implemented regionally, both played on the app and on apps for local radio stations. Three ads were created to educate the consumer. The focus of the spots was to highlight the apple is a cross between two beloved varieties, Honeycrisp and Fuji. One spot is a play off a Pure Michigan ad highlighting where the apples are grown (Michigan) and two ads talk about the role of apples as a snack.

The billboard designs are simple to catch the eye of the daily commuter—“Sweet, Crunchy and Evercrisp.” These boards are posted for four weeks in high traffic locations near retail locations.

“The best part of the event weekend was when we encountered the trifecta. Someone saw a billboard and heard a radio spot—and now they were getting to try the apple and love it and tell others,” said Taylor.

Evercrisp outreach will continue throughout the month of March.