BOSCAWEN, NH - Those of you waiting for the Peanuts’ Great Pumpkin need wait no longer; he’s finally appeared in Boscawen, New Hampshire. Winning a cool $6,000 at the local Deerfield Fair, this 2,528-pound orange behemoth now has the official distinction of being the largest in all of North America.

And having grown North America’s heaviest pumpkin isn’t farmer Steve Geddes’ only achievement. The overgrown squash is actually the second-heaviest ever grown worldwide, weighing in just 96 pounds shy of a pumpkin grown in Germany in 2016 by a Belgian man. 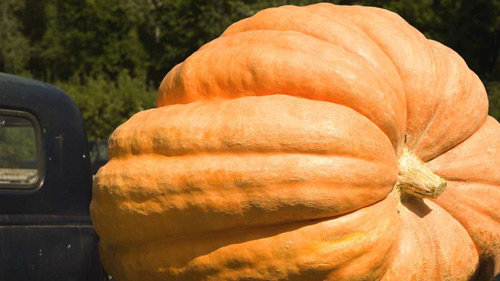 “I was pleased,” Geddes told Concord Monitor of his record-breaking fruit baby. “I knew right away it was the second biggest ever. When you’re involved, you know what’s been grown and what hasn’t been grown.”

Geddes, a gracious winner, was also happy to share some of his tricks of the trade. His seed of choice was the Dill Atlantic Giant Pumpkin Seed—what all competitive pumpkin farmers use, according to Concord Monitor. He also installed heating cables to warm the soil, in which he planted his hand-pollinated female plant directly into the ground. The result? Geddes’ pumpkin gained as much as 52 pounds per day all summer long, essentially growing an 8-year-old every 24 hours.

My favorite part of the story, however, is that when his friend first suggested that Geddes grow giant pumpkins, he called the idea, “the dumbest thing I’d ever heard.”

Dumb or not, imagine all the pumpkin pie you could make out of that baby.