“Calavo has begun fiscal 2016 in fine form, posting improvements in several key metrics. The company has posted year-over-year revenue growth in each of the past 13 consecutive quarter,” explained Calavo Chairman and Chief Executive Officer Lee E. Cole in a statement. “We packed approximately 10 percent more cartons of fresh avocados in this year’s first quarter versus last year, while driving higher margin on lower year-over-year average selling prices for avocados, underscoring sourcing and production-management capabilities that are among Calavo’s hallmarks.”

During the quarter, net income rose 19.8 percent to $6.3 million, approximating $0.37 per diluted share. This is a substantial jump from the company’s output during last year’s Q1, where net income reached $5.3 million, or $0.31 per diluted share. Total revenues grew to $204.6 million in this year’s first quarter, up nearly 10 million over last year.

Cole also commented on the anticipated growth for the avocado industry in general for 2016, explaining that over 2 billion pounds of the crop are expected overall.

“Industry projections continue to point to consumption that is expected to reach 2.5 billion pounds this year. To this point, consider that on the recent Super Bowl Sunday alone, avocado consumption was estimated at 139 million pounds, up from 99 million pounds two years ago and it puts this growth rate in perspective,” Cole added. “The fresh avocado crop this year will be substantial, as well, with a larger expected volume from California supporting the supply of Mexico-grown fruit.”

Other highlights from Calavo’s financial report include: 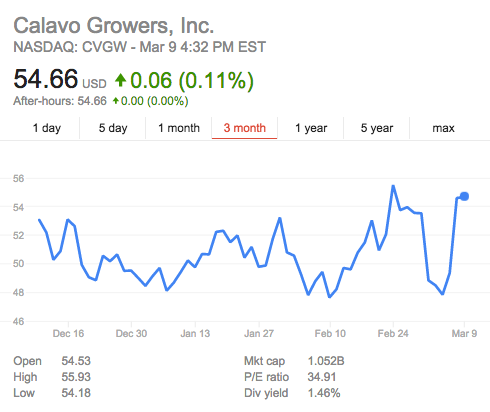 According to Analyst Ratings Net, Calavo traded up 9.8%. The analyst website reports that following the results, the company’s stock reached as high as $55.47, ending at $54.21.

For more industry financial news, continue to check back with AndNowUKnow.