"We only had one year of normal conditions," David Pierce, Climate Researcher at Scripps Institution of Oceanography, said, according to KPBS. "We had this two-year deficit of precipitation on top of that. So I personally think that a kind of defensive position, as far as our water resources, is warranted at this point."

Pierce stated that current indications are an enhanced chance of a dry winter, "which is unfortunate because we just had this normal winter that helped us."

Right now the National Weather Service's Climate Prediction Center has the chances of a La Niña forecasted at 75 percent. A proverbial flip-side to El Niño, which we have previously reported is a warming of a certain patch of the central Pacific that changes weather patterns worldwide, La Niña is a cooling pattern in the equatorial Pacific.

Where El Niño is associated with flooding in some places, droughts elsewhere, and, for California, a wetter winter, La Niña tends to be linked to a drier season for the west coast. 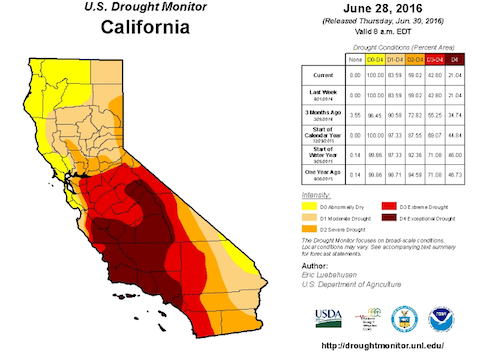 Currently, about 60 percent of California is considered in drought conditions, according to the U.S. Drought Monitor, down significantly from the 90 percent last year.

Pierce reiterated that this, like the predictions for El Niño’s influence, were just predictions and not guarantees.

While the researcher reported confidence that California shouldn’t expect to be out of the drought any time soon, this year’s El Niño was also reported to be a Godzilla pattern, yet last winter was referenced as "normal."

As these predictions solidify and we await more news and, hopefully, yet another wet winter, keep checking in with AndNowUKnow.