Chiquita Partners with The New Big-Screen Sequel THE LEGO® MOVIE 2: THE SECOND PART

FORT LAUDERDALE, FL - Everything is awesome; everything is cool when you’re part of a team—especially when that team is Chiquita Brands International and THE LEGO® MOVIE 2: THE SECOND PART. The two are joining forces in a new action-packed partnership and marketing campaign that includes new Chiquita stickers, a big screen debut, and even a new LEGO character.

“Chiquita bananas are bright and fun just like our fellow iconic brand LEGO, which is why we are thrilled to team up with THE LEGO MOVIE 2: THE SECOND PART,” said Jamie Postell, Chiquita’s Director of Sales North America. “Chiquita shares the common values of brightening up our consumer’s days and encouraging fun and laughter for all. We hope to provide a little bit of sunshine and happiness this winter season, inspiring fans to discover our special stickers, collect them, and share the love.”

The global partnership kicks off mid-January and runs for the four-week period leading up to the February 8th North American release date of the movie. During this time, Chiquita will unleash 300 million blue stickers featuring the most recognizable characters from THE LEGO MOVIE, including Banarnar—a LEGO brick-built banana character making his big screen debut. The stickers will also feature codes that will allow banana fans to play online games and win themed prizes. And, if consumers collect the film-themed Chiquita stickers and submit the unique codes (from the stickers or Facebook), fans will also be entered to win the ‘Chiquita Build For A Chance to Win’ promotion, which include prizes like movie tickets, LEGO brick sets, LEGO e-gift cards, and more. 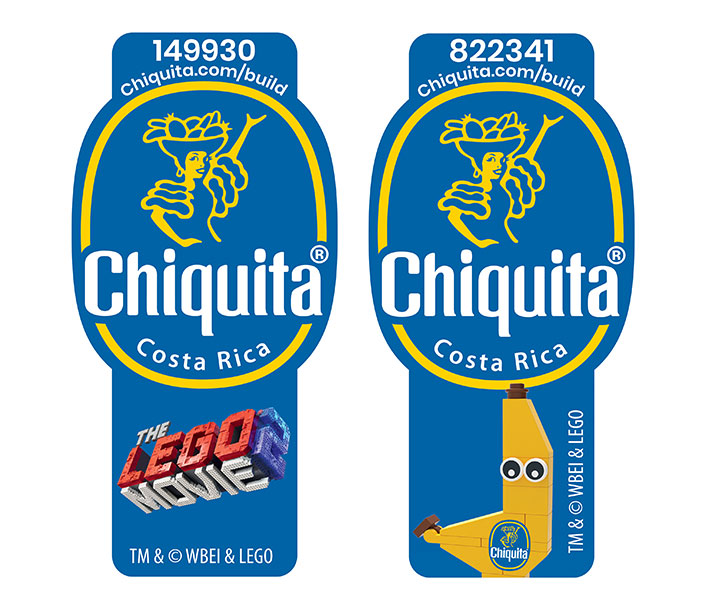 Chiquita is also developing healthy and delicious film-inspired recipes that encourage building and teamwork amongst shoppers and their families. According to a press release, these recipes include Lucy’s Chiquita Banana master builder cheesecake, and General Mayhem’s healthy Chiquita Banana sweet sandwich, with more found here.

For more information about Chiquita, its Blue Sticker Program, and partnership with THE LEGO MOVIE 2: THE SECOND PART, click here. And, to stay ahead of the latest producey partnerships, keep enjoying AndNowUKnow.