Study Looks to Predict Droughts by Analyzing the Blob

WESTERN U.S. - The weather anomaly circulating just off California's coast referred to as "the warm blob" was a focal point for a recent analysis looking to predict when similar patterns could influence droughts to come.

As we previously reported, the blob stretches 2,000 miles down the coast and more than 1,000 miles out from the West Coast, from the Gulf of Alaska to Mexico. It has been reported that the entity blocks winds that usually cool the ocean over the winter, as well as rain clouds, causing less heat to leave the Pacific and adding to the drought occurring in the western U.S.

“The atmospheric variability that forced the warm blob is the same that forced the drought,” Emanuele Di Lorenzo, Ocean and Climate Dynamics Professor at Georgia Tech and Co-Author of the analysis, published in Nature Climate Change, according to KQED Science. 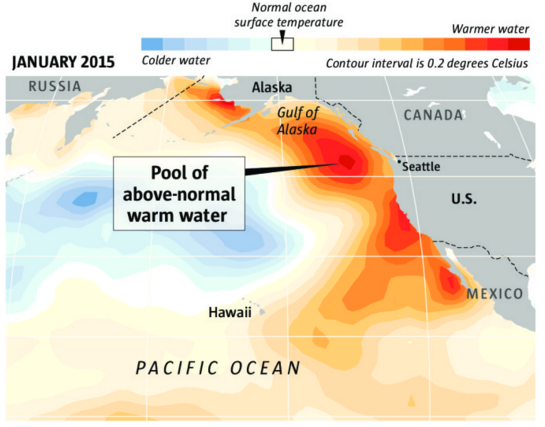 So while the blob can not be blamed solely for the drought, the timing is unfortunate, according to the report. But the patterns could afford insight into other such “marine heatwaves” as it is referred to and droughts to come.

“This could potentially provide predictability. This is natural variability that we’re dealing with,” said Cliff Mass, Professor of Atmospheric Sciences at the University of Washington, according to the report.

Scientists theorized, among other outcomes, the possibility that El Niño might help loosen the blob’s hold, but that does not yet seem to be the case.

“These climate patterns tend to have some influence on each other, and then El Niño is a central player in coordinating the connection,” Nathan Mantua, a National Oceanic and Atmospheric Administration scientist that worked with Di Lorenzo, said. “Looking at the historical record we see that similar things have happened, but never to the extreme that was observed in the last few years.”

AndNowUKnow will continue to keep you posted as experts work towards answers that could help mitigate risks in the produce industry.