Taylor Farms® Awards $20,000 Academic Scholarships Each to 10 Children of Employees; $5,000 Each Year They Remain Enrolled or Graduate School

SALINAS, CA – As Taylor Farms® continues its commitment to strengthening the future of America, as well as its local communities, the company has announced that it has awarded ten deserving students with $20,000 academic scholarships.

“At Taylor Farms, we believe every young adult should have the opportunity to thrive,” said Bruce Taylor, Chairman and CEO, Taylor Farms. “We fully support education as a way to change lives and help build a strong, thriving future for America.”

All of the scholarship recipients are children of active, full-time Taylor Farms employees who wished to pursue higher education, according to a recent press release. Each student received a check upfront for $5,000 with a guaranteed renewal of $5,000 for each of the four years they remain in college.

“In the last five years, Taylor Farms has invested over $550,000 in college scholarships for over 60 children of employees. There's nothing more gratifying than investing directly back into the next wave of great young students and leaders,” shared Mark Campion, President, Taylor Farms Retail.

The Taylor Farms Scholarship Program was formally developed in 2012, although the company has been supplying scholarships since 2008. Receipients are selected from a 12 member committee, six people from the Taylor Farms Retail Deivions and six from the Foodservice division.

The 2016 awarded recipients, and their respective places of study, include:

The students were presented with the scholarship at a luncheon on June 28, hosted by Taylor Farms at the company’s retail salad plant patio in Salinas, CA. The awards were presented in Spanish for the first time ever, by Rigo Ramirez, Director of Operations, Taylor Farms Retails. 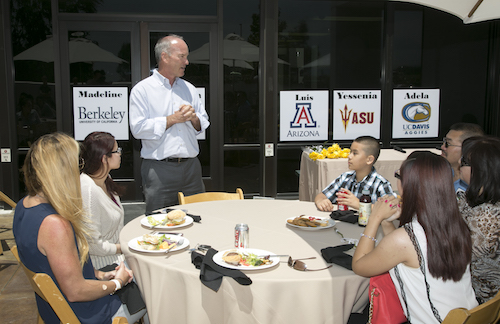 To date, Taylor Farms has awarded $320,000 in first-time scholarships, and an additional $220,000 in renewal scholarships.

As industry leaders continue to invest in their communities and the next wave of fresh produce innovators, AndNowUKnow will have the latest in headlining news.