FRESNO, CA - With a growing demand for more year-round fresh produce programs and one-stop-shops for fruit and veg solutions, Crown Jewels is highlighting the backbone of the company’s sales team this month with a spotlight on a driving force within the company, Robbie Mathias and Roger Mathias.

I sat down with Crown Jewels’ Partner, Atomic Torosian, as he shared the journeys of both sales leaders, and how they are shaping the future of the company.

“Robbie Mathias is a third generation produce salesman from California and son of the President of Crown Jewels Produce, Rob Mathias. His grandfather is Rick Mathias, who used to work for a large west side grower back in the late 50s and 60s before starting up his own produce packing and marketing company. So you see, Robbie has got it in his blood,” Atomic shared with me. And in terms of family lineage in this industry, it didn’t hurt that Rick also worked for Sobey’s Produce before retiring from Crown Jewels Produce this last year.

Robbie himself worked as a Supervisor/Manager for Sam’s Club prior to kicking off his Crown Jewels Produce career, and has been very active in sales the past 10 years. With his work at Crown Jewels, Robbie has worked his way up the ladder by handling many of the company's large retail accounts.

“Robbie brings a retail-minded background, from his work with Sam’s Club, while he helps develop new retail accounts for our company,” Atomic added. “His insights continue to elevate our business strategies while enriching and expanding our relationships across the industry. 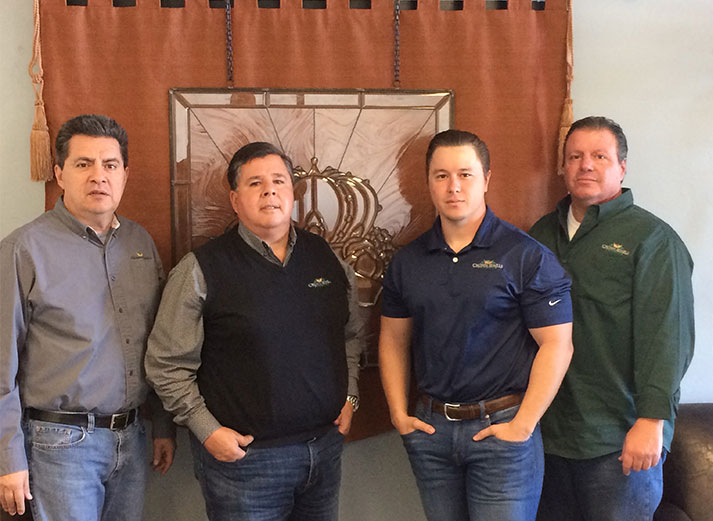 So you may be wondering, does Robbie have any spare time? When I put the question in front of Atomic he laughed and shared that Robbie enjoys coaching his two young sons in many sports activities, is an avid golfer and, drumroll please…is a dedicated power weight lifter with his best mark of over 400 lbs on the bench press.

On the other side of this powerhouse partnership is Roger Mathias, brother of Rob Mathias and uncle to Robbie Mathias. A native of Fresno, California, Roger grew up in a large produce family. After graduating from San Diego State University, Roger joined his father and brother Rob at Ogee Packing where they sold the family’s fresh tomatoes. Roger also traveled annually to Brawley, California, to sell winter vegetables and melons.

“Roger’s produce career took root in sales positions at The Stephen Company, and he also worked four years on the sales desk at Masters Touch in Nogales and San Diego, selling tomatoes, peppers, and cucumbers before joining Fresh Pac in 2001,” Atomic said, noting that Roger has been taking on more responsibilities the last four years working for Crown Jewels Produce where he works with many wholesalers, foodservice, and retail accounts across the country.

Atomic added that while Robbie may be a power lifter, Roger brings the power of life-long experience and a deep understanding of the industry, contributing many years of senior leadership and stability to Crown Jewels, and Atomic is excited to see where the duo take the company to next.

“Robbie is the young blood of our company while Roger brings the much needed knowledge and perspective and to the Nogales Sales Group,” he finished.

Headed up by Paul Bachelier, Crown Jewels Sales Manager, the sales team represents a trifecta of stories and successes, and from the looks of it, they have quite a few more stories to build.