CHICAGO, IL - It seems like just yesterday we were gathered in Chicago connecting with those of the produce industry at the latest United Fresh. To kick off the innovation-centric event, IFCO hosted a beautiful opening party, where Wolfgang Orgeldinger, CEO of IFCO Systems Group, shared with ANUK that the expo was not all that was being celebrated. 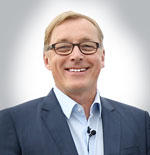 “We’re not only celebrating United, we’re also celebrating the 25th anniversary of IFCO,” Wolfgang shares, explaining that the company has seen staggering growth since it was founded in 1992.

“We are the pioneer of pooling solutions for reusable packaging for fresh food. We are the global market leader, operating in more than 30 countries and serving customers in more than 50 countries around the world,” Wolfgang says.

Some of the numbers he shares are:

But don’t just take our word for it! Hear it all from Wolfgang himself, as well as how to say “AndNowUKnow” in German, in the short video above.