SACRAMENTO, CA - The California Leafy Greens Marketing Agreement (LGMA) saw the lowest amount of citations on record for the 2014/2015 year, according to its Annual Report.

“It’s our strong belief that the combination of comprehensive training, frequent audits and the requirement that all citations be corrected is what’s behind the high rate of compliance and continued improvement LGMA members have experienced over the years,” Scott Horsfall, LGMA Chief Executive Officer, said in a press release. “The number of citations issued has continually been falling since the inception of the LGMA in 2007.” 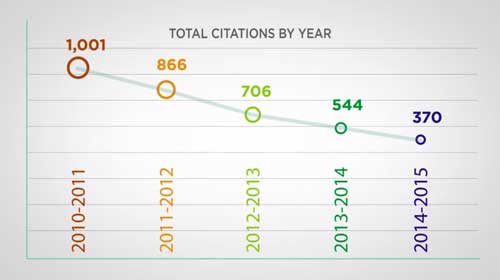 Representing less than half a percent of the total checkpoints verified during the entirety of LGMA’s audits for the year, the report showed only 370 citations were issued total of the nearly 75,000 food safety checkpoints audited at California leafy greens farms.

Details of what the LGMA’s Annual Report entails and what was found for the 2014/2015 year can be seen in the short video below:

According to Horsfall, the information found in the report, which provides an analysis of the mandatory government audits conducted through the LGMA program, is made public to demonstrate transparency.

“To be clear, the LGMA system requires that all citations be corrected,” said Horsfall. “So, in the end, the compliance rate for every LGMA audit is actually 100%.”

A closer look at the report numbers shows:

Horsfall noted that the information allows the LGMA to focus its training efforts to the areas where it’s most needed, and that continuous improvement and vigilance are both core values for the leafy greens industry.

“The trends seen in the LGMA’s latest analysis are positive and clearly demonstrate the industry's commitment,” he said in the release. “At the same time, growers and shippers recognize they must continue to do everything possible to mitigate risks and protect public health.”

The full report is available online here, for those who wish to read more in depth, as well as more information about LGMA activities.