JALISCO, MEXICO - Creative pepper displays can earn cash in more ways than one—Oppy’s announcement on why retailers might want to “PepperUp” with Divemex is hard to pass up. The marketer and greenhouse vegetable producer is teaming up with its grower-partner to offer a display contest worth thousands of dollars in prizes early in the new year, an extra step up from the not-so-small fact that sweet bell peppers are among the most popular vegetables.

“Peppers are among the most eye-catching items in the produce department,” said Aaron Quon, Executive Director of Oppy’s greenhouse category. “We are encouraging our customers to drive sales by bringing their pepper displays ‘up’ in size, or in location, like moving the display ‘up’ to the front of the store or department. Another way to ‘PepperUP’ would be to include organic and conventional peppers on display or up-selling to a socially conscious consumer because all Divemex peppers are Fair Trade Certified.”

Divemex greenhouses are located in the states of Sinaloa, Nayarit, and Jalisco, Mexico, with its season spanning from late August through late May. 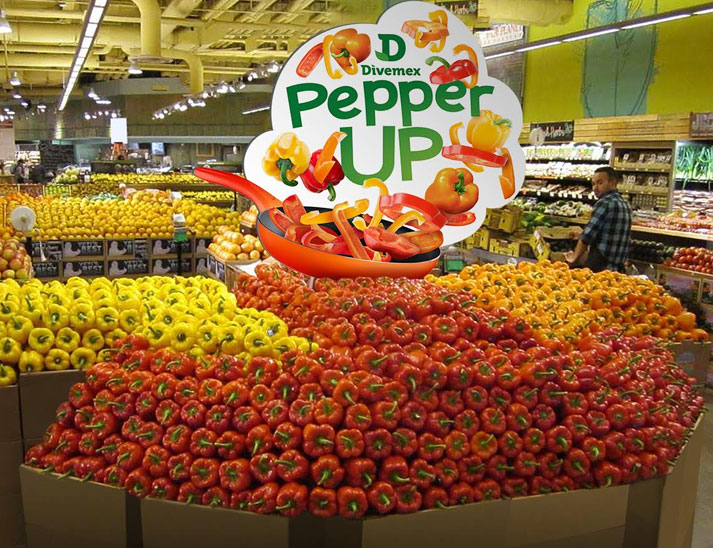 Calling the grower a pioneer known for growing beyond expectations, Quon said in a press release that “Divemex delivers exceptional pepper quality, appearance, and flavor, made possible by years of growing expertise and sophisticated production practices undertaken in high tech greenhouse environments.”

The company’s CEO, Luis de Saracho, added that the 2018-19 season is progressing well.

“With production in Culiacán entering the market now to supplement the supplies from our Jalisco and Nayarit greenhouses, we’re excited to see volume ramp up and make peppers plentiful for the display contest and more,” he stated; great news for the upcoming promotion.

Running from mid-January to the end of March, the Divemex “PepperUP” competition invites retailers to construct large, creative displays of Divemex-branded sweet bell and mini peppers in bulk and assorted pack styles. The builder of the top display will cash in on the $2,000 grand prize, while second place earns $1,000 and third will receive $500, the company said. The first 50 entrants can select from $25 Subway or Starbucks gift cards.

To help, Oppy said it is offering bright, large-scale PepperUP point-of-sale signage to bring even more attention to the Divemex displays—a move that helps ring in not only prize cash, but register cash as well. Photo entries for the contest can be emailed to or uploaded at [email protected], along with the name of the produce manager and store, as well as an address, email, and phone contact information, as well as the nominee’s preference of Starbucks or Subway gift card.

Good luck to all who enter!