Rich Macleod to Retire from TransFresh After 40 Years of Service

ORLANDO, FL – After serving the company since 1976, the Director of the TransFresh Corporation North America Pallet Division, Rich Macleod, will retire from 40 years with the company this June.

The announcement came today from the company’s President and CEO, Ken Diveley. Macleod will serve in his position until June 30, before being succeeded by long-time company veteran, Michael Parachini.

“Although we will miss Rich and wish him a rewarding retirement, I am confident that the experienced TransFresh Tectrol Service Network, under Michael’s leadership, will carry on Rich’s legacy of exceptional technical know-how and commitment to customer service without missing a beat,” Diveley said.

Macleod joined the TransFresh team in 1976 as a lab assistant after earning his Master of Science degree in Postharvest Plant Physiology from UC Davis. Macleod then quickly became involved in the assessment of Tectrol Technologies' commercial relevancy for a wide range of commodities. Through this research, Macleod helped cultivate a new selection of applications to utilize controlled and modified atmosphere packaging. 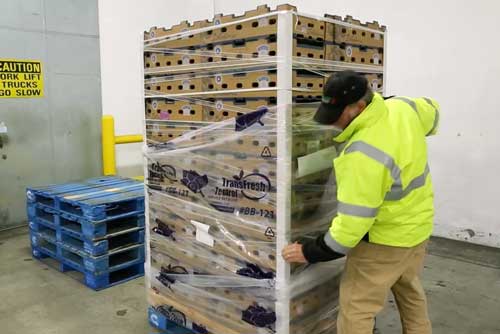 By 1990, Macleod had moved through several senior positions with the company to become appointed as the head of the Pallet Division. Most recently, Macleod and his team celebrated the successful development of the new TransFresh Tectrol Storage Solutions for Blueberries, which combined a unique zipper-sealed pallet closure system with Apio’s BreatheWay® Technology.

“I am grateful to have had a truly rewarding career in an industry that I love, and I am confident I am leaving behind a strong team that, with Michael at the helm, will continue to service our customers and the fresh produce industry with sound technical capabilities and dedicated effort," said Macleod. "I look forward to seeing their many achievements in the months and years to come.”

During his 40 years at TransFresh, the company listed Macleod’s notable achievements as the following:

“For many years, Rich has been the guiding force behind the success of the TransFresh Pallet Division and a wide range of pioneering services and operational innovations that have enhanced the efficiency and efficacy of the Tectrol Modified Atmosphere Packaging System, offering growers and shippers a system for increased marketability of their fresh berry products and retailers a potential for greater returns on their investment,” Diveley stated.

Macleod will remain available to his successor and TransFresh customers past his retirement date to provide for a smooth transition.

Parachini will take over the role of Director for North America Pallet Division at TransFresh with 27 years of experience, flush with operational and technical services management, R&D initiatives, and process improvements for customer needs. The company said that Parachini has been deeply involved in the delivery and expansion of TransFresh and Tectrol Technologies throughout North America. Parachini received his Bachelor of Science degree in Agriculture Management from California Polytechnic State University.

Best of luck to Rich Macleod in his retirement, and count on AndNowUKnow as we continue to report on management announcements and transitions within the fresh produce industry.