“We realize that a building business is not just about getting the order, but servicing the customer before, during and after an order loads,” Jeff said in a written statement. “My expanded, new role is now directing the combined efforts of our team to make that happen.”

As the company’s new Sales Vice President, Jeff will be shifting to a larger scope from his previous role as one the company’s lead Salesmen and Commodity Manager, Church Brothers says. He will now be in the position of managing the company’s regional sales team, national accounts, business analyst, logistics, and marketing. According to a press release, these changes will allow him to focus on supporting corporate initiatives and maintaining the growth the company has experienced over the last decade. 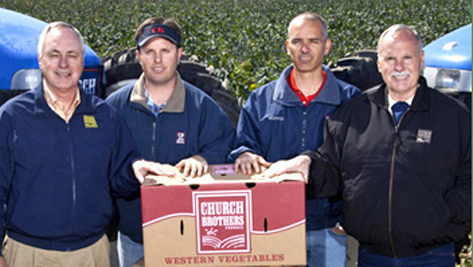 In Tom Bramers' new role as Sales Manager, all twenty members of the sales team, commodity managers, and appointment loading teams will now be reporting to him.

Tom has over 13 years experience in the fresh produce industry, holding prior positions at both Merrill Farms and River Ranch. He is a graduate of Cal Poly San Luis Obispo with a degree in Agribusiness, and is nephew to company Co-Founders Tom and Steve Church.

To learn more about the Salinas-based Church Brothers, visit ChurchBrothers.com.