TEMECULA, CA – Looking to bring its produce grading platform to even further success, Compac has announced a strategic plan for its Spectrim™ machinery. The company will be releasing Spectrim retrofits for non-Compac machinery throughout the industry.

“Initial adoption of Spectrim has significantly exceeded our forecast. Last year’s financial results saw Compac grow revenues by over 40%. Since we launched Spectrim, we are on track to sell 75% more lanes of blemish grading than the previous twelve months,” stated Perry Sansom, VP of Marketing & Product. "Spectrim leads the market and supports Compac's positioning to offer integrated solutions to customers based on core technology, that is second to none. We can aggregate high-value yield data with other sources, to provide rich insights into the fresh produce supply chain."

Retrofits offer packinghouses looking to increase their competitive advantage a unique solution in utilizing current equipment that does not yet need to be replaced while still accessing leading technology. The company stated in a press release that an upgrade allows companies to access the latest advancements without replacing all their equipment.

“Spectrim was built from the ground up with one thing in mind–to be the most powerful optical sorting platform ever offered to the industry,” stated Andrew McQueen, Product Manager. “It’s also future proofed, with the platform designed to allow customers to continuously update their system hardware while receiving frequent software updates to keep them at the cutting edge.”

Compac also stated that this retrofitting of Spectrim, is not unusual for the company, and the next step in bolstering its leading technology. Compac retrofitted Booth Ranches to increase its inspection capabilities back in 2014.

“[The retrofit] allowed us to use a lot of the mechanical hardware from our previous grading equipment. They simply came in and upgraded the software and the cameras and lighting ability so it’s able to see these different visual defects that maybe we weren’t seeing, with our previous sorting equipment,” stated Scott Carlisle, Food Safety Coordinator, Booth Ranches. 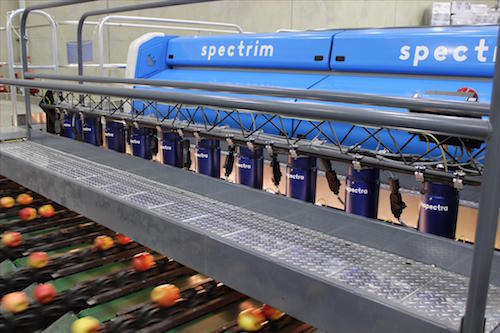 Retrofits are increasingly useful for equipment used for blemish grading. Compac stated that blemish grading is where the most advancements are being made, and provides packhouses with the most value.

Compac named Washington Fruit as its first customer to have Spectrim installed in its packinghouse. The apple company gained this technology in 2015 to ensure its product was packed correctly every time, reducing overheads and producing greater revenue.

“Since Spectrim, we’ve needed a smaller crew to run the line efficiently–a typical shift had 16 people sorting and now a typical shift has nobody sorting and we’re also able to run faster. It was not long into packing with this system that we were able to pull the sorters off the line and have the same consistent grade,” stated Mikey Hanks, Systems Operator at Washington Fruit.

The company stated that its Spectrim technology is already being retrofitted to apple, citrus, avocado, stonefruit, and kiwifruit packhouses. As the company looks to ever-increase operational efficiencies, its customers also remain confident in Compac and its technology as well.

“For Titan Farms and the industry as a whole, I believe the future is bright. Considering the vast potential of this grading platform, the sky is the limit,” asserted Ross Williams, Titan Farms’ Director of Packing. “I believe Compac will continue to improve upon, and develop, new solutions that will continue to increase efficiencies and reduce costs, in order to help make us better packers and provide our customers with the highest quality fruit possible.”

The Spectrim grading platform was released little over a year ago, with nearly 500 lanes sold throughout the U.S., New Zealand, Australia, Europe, South Africa, South America, and China.