NEW YORK CITY, NY - Envy apples are painting the famous New York City Times Square, with messages flashing across billboards of one of the most famous advertising strips declaring “Join the Feeding Frenzy” and “The Next Big Apple.”

“The crowd got so large that the local police came by to ensure it moved along,” James Milne, Oppy’s Executive Director of Marketing, said in a press release. Curious onlookers crowded Washington apple growers as they passed Envy apples out beneath one such billboard, causing quite a stir.

Ironically, Oppy said, the rotating billboard read “Envy - Call Crowd Control” at the time police responded. “We rewarded the officers with Envy apples for their efforts, and all had a good laugh at the irony when we looked up at the billboard,” Milne said. 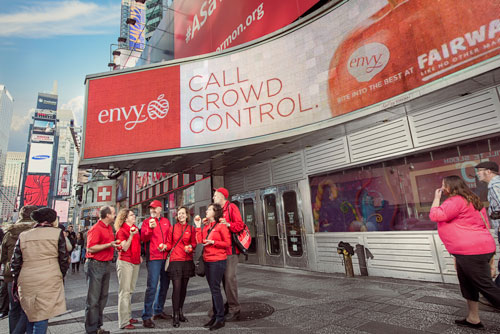 The high impact, dual-screen messages started to flash across the boards of the historic district in November, looking to engage the eyes and mouths of 1.5 million daily visitors.

“It has been a tremendous success,” David Nelley, Executive Director for Oppy’s apple and pear categories, said, according to the release. Oppy is the exclusive marketer of Envy apples in North America. “We decided to have a lot of fun with playful headlines, positioning Envy as the next big apple in one of the most iconic neighborhoods in the world—with messages targeting visitors and locals alike.”

The billboards will continue to engage consumers in Times Square until the ball drop on New Year’s Eve, and Nelley explained that the Washington Envy growers traveled to New York City to sample at key retail outlets. “Our customers built great displays, and shoppers loved meeting the growers and learning more about where the fruit comes from. Social media outreach created buzz around the apple, the demos, and the contests were underway.” 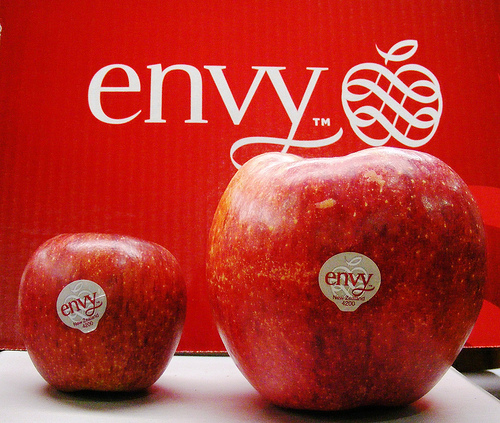 As for passing the apples out under the billboard, Nelley estimated about 700 were distributed in less than four hours. “The apples generated loads of excitement, especially when people connected them with the billboard.”

Overall, Nelley noted that the response has exceeded his expectations, saying that a consistent message spread across trucks and billboards has helped spread awareness of the Envy apple and build fun relationships with retailers.

Oppy has placed Envy billboards in other major markets, including Chicago, Kansas City, and Des Moines, promoting awareness for the brand in time for the expected production lifts of 2016 and 2017.