"Fresh Express is incredibly excited to become part of the Orlando community," said Fresh Express CEO and President Ken Diveley in a press release. "We look forward to being part of the great state of Florida, where Governor Scott continues to build a strong business community." 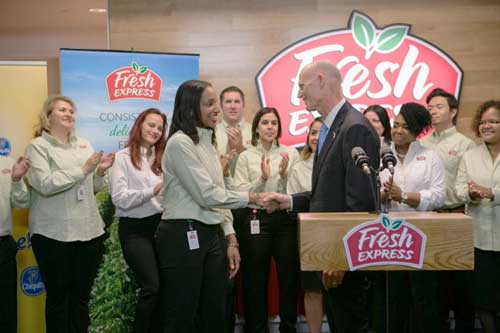 "We're happy to add to the economic health of the area, and we look forward to growing Fresh Express here," Diveley said.

The 120 jobs offered through the Orlando headquarters includes 90 for Fresh Express, and another 30 to support Chiquita’s IT needs. Some of these openings include executive management, sales, marketing, operations, human resources, procurement, and logistics.

Governor Scott expressed his gratitude, stating, “Today's announcement means hundreds more Floridians will be able to get a great job in the Sunshine State. I would like to thank Fresh Express and Chiquita for choosing Florida to grow their company.”

Plans for relocation began after the companies were acquired by orange juice producer Cutrale Group, and a global financial services firm, the Safra Group.

The new owners looked to the future, and for the sake of logistics, decided to move further down the coast from the original headquarters in Charlotte, North Carolina.

Orlando gleamed with potential because of its proximity to other Cutrale Group holdings, according to the company, while Dania Beach was a prime location close to the port where Chiquita receives bananas for ripening and distribution.

In addition to the Florida location, Fresh Express has five packaging plants throughout the United States that support its distribution of about 250 different salad, vegetable and fruit products, along with its 50 fresh produce offerings for food service outlets and healthy snack products.