Kalettes® Get Spotlight at Southern Exposure 2016

SANTA MARIA, CA- If you are still unfamiliar with the amazing new Kalettes® innovation, then this weekend is your chance to get on the bandwagon. The kale and brussels sprouts hybrid vegetable, will be featured by a variety of exhibitors at the 2016 Southern Exposure expo in Hollywood Beach, Florida.

“We are excited to have growers and shippers displaying Kalettes at their booths at Southern Exposure,” said Kraig Kuykendall, Sales Manager for Tozer Seeds America. “The media response and consumer enthusiasm has been outstanding.” 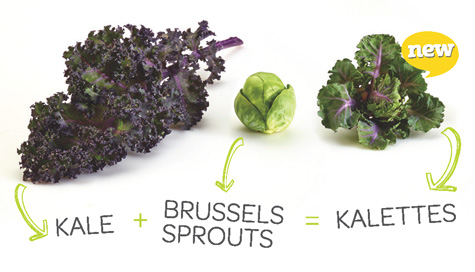 Look for Kalettes at Southern Exposure from the following growers and shippers:

Kalettes are available to both retailers and foodservice distributors by contacting these companies.

For those keeping an eye on foodie favorited, Kalettes was named one of 2015’s top food trends. Consumer awareness has increased rapidly, with over 100,000,000 impressions and tremendous momentum from both consumers and media critics, according to a press release.

Kalettes are the result of 10+ years of research by the family-owned vegetable breeding company Tozer Seeds, based in England.  Offering a fresh fusion of sweet and nutty flavors, this kale and Brussels sprouts hybrid presents the best traits of each of its parent vegetables.  Kalettes are non-GMO and were developed by cross-pollinating brussels sprouts with kale through traditional methods.

I know what booths I'll be adding to my list, see you all at the show!