LEAMINGTON, ON - Lakeside Produce is making a new massive $7 million expansion to its Leamington vegetable processing plant, adding 203 local jobs in the process. The multi-million dollar project comes in part due to a more than $1 million investment from the Southwestern Ontario Development Fund.

“At Lakeside we know the value of providing smart, healthy choices to our growing consumer base,” said President and CEO of Lakeside Produce, Chris Cervini, in a statement. “We take pride in our passion for producing top quality products and we welcome this partnership with the Ontario government — we share a vision of bringing fresh, locally grown produce to the people of our province and our export partners.”

During the expansion, which is expected to be completed by fall 2019, the company will install state-of-the-art processing equipment that it believes will both increase efficiency and production capacity.

When the expansion is complete, Lakeside Produce expects to have a total of 515 employees. This expanded number will help to increase production and meet the growing demand for its products, which include bell peppers, cucumbers, and specialty tomatoes, Cervini told CBC News. 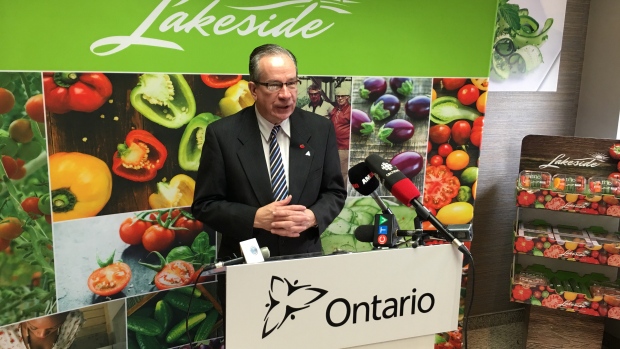 “Leamington is well known for producing high-quality vegetables and being an economic hub for Ontario’s agri-food sector,” added Jeff Leal Minister of Agriculture, Food and Rural Affairs. “Through our government’s investment of the Southwestern Ontario Development Fund, it will allow Lakeside Produce to expand and build on this success as it continues to contribute to our province's growing agri-food sector.”

Leal explained that the newly modernized plant will help support new job creation, retain the region’s current jobs, and grow Leamington’s economy to develop new opportunities for the local community. Since October 2012, Ontario has invested over $80 million through the Southwestern Ontario Development Fund, according to a press release, leveraging a total investment of more than $900 million. The government says that these investments have helped to create over 3,500 new jobs and retain more than 18,500 existing jobs in the region.