OCEANSIDE, CA - Another year of partnership between the Singh family’s Oceanside Pole and exclusive marketer Oppy is bringing a slew of exciting new developments for 2017. Beyond a refreshed product branding and the addition of significant new tomato acreage, the Oppy-Oceanside Pole partnership will also use the new year to introduce an entirely new offering—Brussels sprouts.

“Brussels sprouts complement tomato production quite well,” explained Priya Singh, Oceanside Pole’s General Manager. “They enhance soil health and are counter-seasonal, which enables us to extend our operation virtually year-round. We’re also capitalizing on the suitability of our climate to feed into a popular culinary trend.”

The sprouts will be available in 25-lb bulk boxes, shipping from Yuma, Arizona, between March and mid-April, and from Salinas, California, between mid-April through May.

“We expect the program to appeal particularly to area retailers as a refreshing new component to their ‘California Grown’ programs,” added Mark Smith, Senior Sales Manager at Oppy. “It’s an excellent warm-up to the Oceanside vine-ripe and roma tomato program which begins in July.”

Smith expects the company’s tomato harvest will grow by about 500,000 cases of rounds and romas combined due to the company’s addition of about 100 new production acres. The Singh family is still planting their signature Sweet-10 seed, but will also propagate some new varieties that Smith said have exceeded expectations during trials. 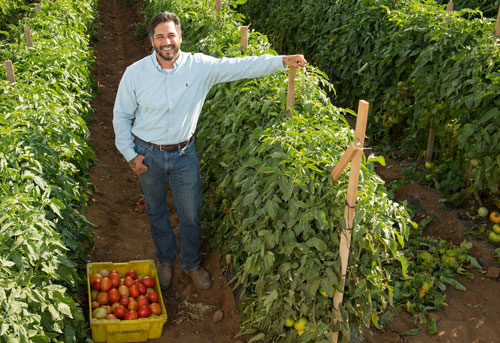 As Oceanside Pole ramps up its growth for 2017, the company said it is also looking towards a renewed branding approach to match.

“The Singh family has been farming in Oceanside for over 75 years,” said Smith. “Their attention to detail is second to none. They’re the exceptional growers they are because they walk the fields every day, monitoring water and fertilizer, pruning, and staking the plants, and so much more. They are absolutely on top of every detail. “

The new brand is a way to help elevate Oceanside Pole to a contemporary realm that resonates with consumers, explained Oppy Vice President of Marketing James Milne, blending the story of growing excellence with the spirit of the Southern California region. “The new brand will endeavor to playfully capture what it means to have grown so long and so well in coastal Oceanside, while conveying the results of this labor of love: beautiful, richly flavored produce that honors every table where it is served,” he summarized.

The produce industry is clearly in for some exciting developments from Oceanside Pole, so stay tuned in to AndNowUKnow as we bring you the latest.